With a rich and complex flavor that is best released when cooked, chantrelles are popular in soufflés, cream sauces, soups and other dishes.

◄ Back to Results 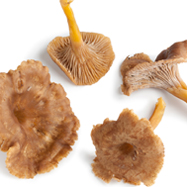 Cantharellus cibarius
Chanterelles – sometimes called golden chanterelles or girolles – are orange or yellow, funnel-shaped mushrooms with gill-like ridges that run almost all the way down the stem, which tapers down seamlessly from the cap. The golden chanterelle is perhaps the most sought-after and flavorful chanterelle, and is often considered on the same short list of gourmet fungi as truffles and morels.

Chantrelle Mushroom Flavor
Rich in flavor, chanterelles have a distinctive taste and aroma that is difficult to characterize. Some species have a fruity odor, others a more woody, earthy fragrance, and others still can even be considered spicy.

Chantrelle Mushroom Uses
There are many ways to cook chanterelles. They are excellent sautéed in butter, oil or cream and used in recipes involving wine or other cooking alcohols. They are popular in soufflés, cream sauces and soups but are not typically eaten raw, as their rich and complex flavor is best released when cooked.

Looking for inspiration? Check out recipes, mushroom news and more from the Mushroom Council.